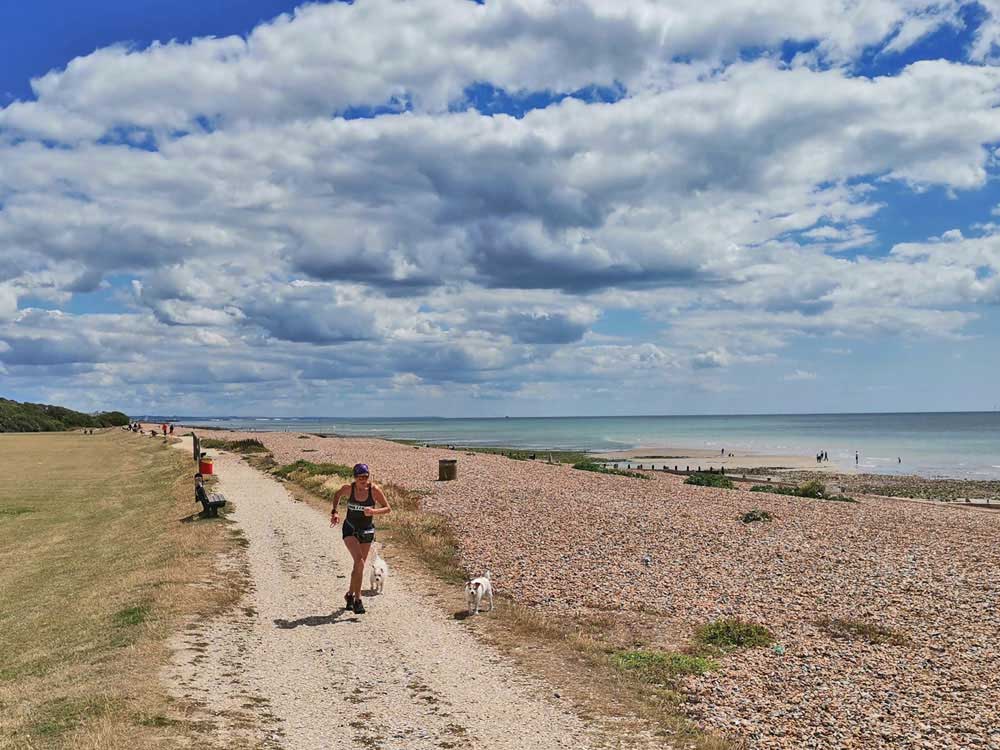 Our apartment in Worthing on the South Coast in the UK is right on the seafront so running up and down the prom and coastal paths is a much flatter - and faster - training option compared to being in the mountains where it was all about hill climbing and distance.

The prom has a never ending flow of people of all shapes, sizes and ages running from dawn to dusk - and beyond (night owls happily wing their way along in the dark).  Unlike in the mountains, you're never alone running beside the seaside.

And so many people are on Strava, which means there are many segments throughout the length of the prom, a total of around two miles. So now instead of going for Strava's climbing and distance running challenges, it's game on for speed.

We had 30mph westerly winds, last week, perfect for getting some assisted extra fast pace on the west to east segments. Jogging two miles into the strong wind was a challenge in itself but turning round was like flying. I didn't manage any PRs - no contest for the ones I set five years ago doing the Worthing 10k - but I managed to score a few 'achievements' and second/third fastest times.

That's the good news. The bad news is that I strained my hamstring in the process and couldn't run for four days. So for three months in the mountains, running on rough trails, over rocks and streams, managing to even do 100km in one week, I didn't have so much as a twinge but one quick sprint left me grounded.

Note to self, you're not as young - and will never be as fast - as you used to be.

Even when I was fashion director of Cosmopolitan, I was more often in Nikes than Manolos. I ran six marathons, numerous half marathons. Said ‘never again’. Then Siggy took up running – and I was off...

Born 26 weeks premature twin baby, weighed 26.2oz. So born to run 26.2 miles! I've now completed my first marathon. I am also a Sports Massage therapist born to help others in their fitness journey... ...